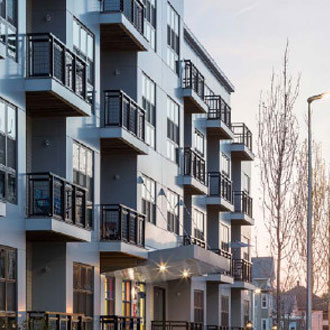 GID announced today that it acquired Maxwell’s Green, a 184-unit luxury, LEED-silver apartment community located in the City of Somerville approximately four miles from Boston’s CBD and less than one mile from Davis Square, which provides both lifestyle amenities as well as a subway station stop on the Massachusetts Bay Transit Authority (MBTA) Red Line. Davis Square is accessible from the Property via a short walk on the Somerville Community path, which is immediately accessible from the property.

The property is located adjacent to the future Lowell Street Station which will be constructed as part of the MBTA’s Green Line Extension. The property offers residents a Class A apartment community within a dense neighborhood largely made up of older housing stock, which are privately owned. The property was built in 2013 with an average unit size of 913 square feet. The units are located in four buildings on a 4.3 acre site. The unit mix consists of 12 studio units (8%), 71 one bedroom/one-bath units (44%), 66 two-bedroom/two-bath units (41%), and 11 three bedroom units (7%). The apartment units are built to a condominium standard and include high end finishes such as granite countertops, under mount sinks, stainless steel appliances, and plyboo flooring.

Bill Chiasson, Sr. Vice President of Real Estate Acquisitions at GID commented, “This provides an opportunity to acquire an asset in the City of Somerville which has transitioned and now demonstrates similar demographics as its more recognized neighbor, the City of Cambridge which is home to Harvard, MIT, and many leading technology companies. Maxwell’s Green location, within the heart of the Somerville, differentiates it from much of the other future product being delivered in west Cambridge and Somerville which may share a zip code but lack the connectivity to the neighborhood.”